The six experimental 18-inch gauge Handyside locomotives were built by Fox, Walker & Co in the spring of 1878.

They were constructed to the 2-4-2 wheel arrangement and weighed approximately eight tons in working order.

The 3cwt coal bunker and 83 gallon water tank were located at the rear of the locomotive, while the winch was located at the front, forward of the smokebox.

The locomotive cylinders measured 8in by 10in and the mainframes were placed outside the driving wheels.

Initial tests were carried out at the Royal Arsenal, Woolwich in 1878 and in the following year one of the engines was sent to undergo tests at the School of Military Engineering at Chatham.

These were undertaken on a mile long continuous test track with a short approach section incorporating gradients of 1-in-10 and 1-in-11.

It was established during the Chatham tests that the Handyside locomotive was capable of a speed of 12 miles per hour on the level, and was able to pass around curves of 15 feet radius.

Its maximum haulage capacity on the level was approximately 50 tons, and with the aid of the winch it could haul 10 tens up a 1-in-10 gradient.

Certain design defects became apparent during the tests, these included:

After about two years operational experience with the locomotives, it was found that the flimsey construction of the engines’ mainframes (brought about by the desire to keep the overall weight to a minimum) caused breakages of various steam pipes.

Although rejected for field purposes, some of the locomotives were used in connection with the construction of the fortifications at Chatham between 1880 – 1884.

The rejection ensured that no further locomotives would be designed specifically for use on 18-inch gauge lines within the trenches. 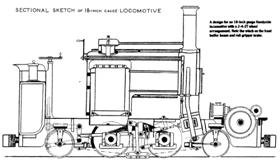 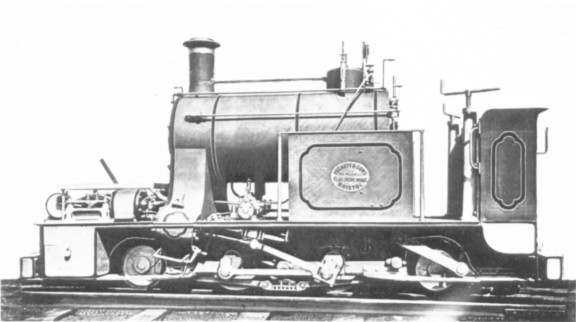 More information on Handyside can be found on the Industrial Railway Society website, here